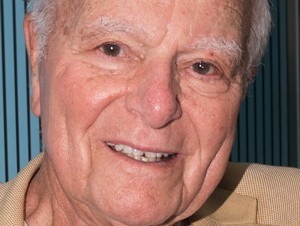 Ernie was born in Germany and immigrated to the United States with his mother in 1939. During World War II, he was assigned to a British intelligence unit to interrogate captured Nazi soldiers because he was fluent in German. His unit questioned infamous German generals (Speer, Goering, Van Papen and Rundstaet) prior to their prosecution at the Nuremberg trials. After the war he wed his wife Ellen, had a successful career in children’s clothing sales, and raised their two children, Kenny and Ellen, in Indianapolis. Today he is the proud grandfather of four grandchildren.

What motivates you in your giving?

I have a sense of obligation because of my background. My father was killed in 1938 during the wave of violent anti-Jewish pogroms of Kristallnacht (the night of broken glass). My grandmother survived her imprisonment in Theresienstadt concentration camp, and my mother and I came to the United States with nothing.  I feel very grateful to have been able to live and thrive in this country and to be a member of the Jewish community.

In what ways are you involved?

How long have you been giving to the Federation Annual Campaign

I started with a $10 gift out of his $55 per week paycheck. I have been a contributor for over 65 years.

In what ways have you passed on to your children your philanthropic tradition?

My late wife Ellen and I demonstrated the importance of giving back by our active involvement as lay leaders, as well as by our long term giving to the Jewish community.

What makes you most proud of our Federation and agencies?

I am happy that the Federation is attracting a broad base of community volunteers. I feel it is very important for the Jewish community’s survival.