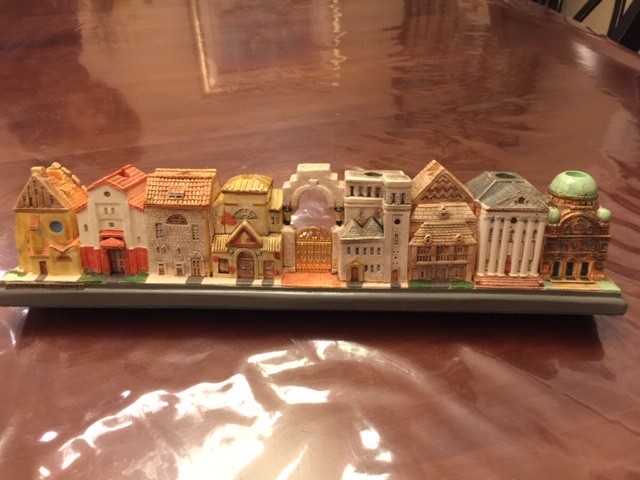 Submitted by Ronnie & Freddie Kaseff, this menorah represents historic synagogues of Europe. The below is an excerpt from the Artist Statement from artist Maude Weisser:

“The Synagogues chosen for this Chanukiah reflect the great diversity of architectural styles employed by Jews of the Diaspora in their respective lands. Each community was influenced by the unique styles of the particular country or city in which they were located. However, underlying these surface differences is the unity and strength of the Jewish faith, common to Jewish communities the world over.

This very special and unique Chanukiah was created in loving memory of the many diverse Jewish communities which existed in Europe prior to World War II. Although several of the synagogues still exist today, the communities which once flourished within them for the most part no longer do, but the contributions of these communities to world Jewry today shall never be forgotten.”

From Left to Right in the Photo