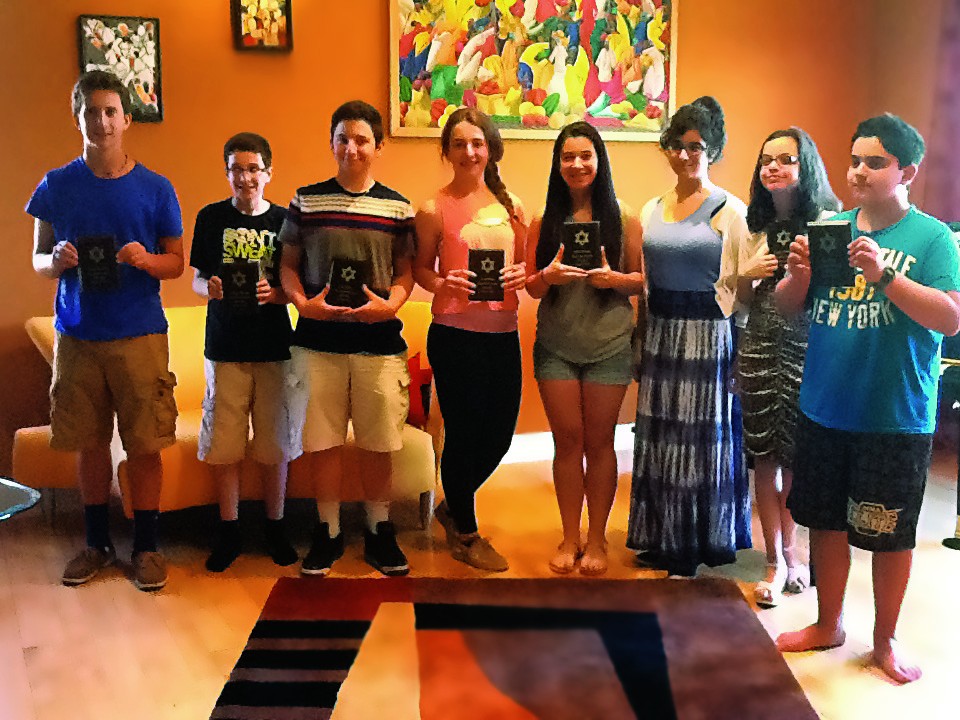 On Friday, May 30, students from the program Shorashim-Roots presented their final projects. The program started two years ago at the Russian School by the initiative of the Jewish parents from the former Soviet Union republics who wanted their children to know more about Jewish life and Jewish culture.

The Jews from Eastern Europe are often faced with a dilemma of triple identities. Their children grow up in the American culture and are Americans. They are also Russians, despite the fact that their families have emigrated to the U.S. from Ukraine, Moldova, Belorussia or other corners of the post-Soviet world. Their parents reinforce the Russian language at home, cite Russian poetry and historic events, while simultaneously cursing Soviet regime and anti-Semitism. The kids also hear that they are Jews, that their parents and grandparents couldn’t get accepted to good universities, obtain good jobs and overall were discriminated against because they were Jewish.

The parents want their children to learn more about their Jewish culture, something they were deprived of. Raised in the world where all religions were prohibited and substituted by one, communism, they were not used to religious traditions, but felt very connected to their Jewish roots and wanted their offspring to feel the same. After dozens of discussions and meetings, the solution finally emerged.

A 14-year old graduate of the Hasten Hebrew Academy, Clara Fridman, wrote a two-year curriculum and took charge. Parents helped with goals and objectives, but mostly with words of encouragement. In 2013 the program Shorashim-Roots, aimed at introducing Jewish children from Soviet Union to Jewish culture, was born.

During these two years, the kids learned about Jewish history and holidays and their meanings. The parents got involved and delivered lectures about Jewish musicians and Klezmer music, pogroms, life in a kibbutz, Jewish scientists and artists. Among the guest speakers were Hart Hasten, who talked about preserving Jewish identity in atheistic Kazakhstan, Debby Grant, who delivered presentation about Jewish agencies in the Indianapolis and North Central student Awiad Karmazin with his inspiring speech about opportunities for Jewish youth in BBYO. The class baked challah and matzo with the Shustermans and celebrated several Jewish holidays there. Chanukah on ice was a riot, as well as Jewish dance class.                               .

For the final project, students had to learn about family histories and make a family tree. The project brought forth many amazing, but often heartbreaking stories. Emily Fridman discovered that her grandmother’s relative was famous Russian poet Osip Mandelshtam who, after writing a grotesque poem about Stalin, perished in Gulag.

During World War II, Misha Rekhter’s grandfather was on the front lines from 1941 to 1945 and left his autograph on Reichstag. Misha’s two great grandfathers were killed during that war; one was 32 and another was 36. Shira and Ethan Moran’s uncle co-authored the music of the Israel national anthem “Hatikva”. The older sister of Anya Klauz’s grandmother died from hunger during the Leningrad’s siege. The meaning of the Leo Soyfer’s last name was “Torah script scriber”. Sam Nief’s great grandfather was killed by Nazis. They tied him up and pushed his from the second floor of a building. The family histories reflected the life and fate of Jews in the former Soviet Union and other parts of the world.

As we, the parents, were listening to our kids explaining the lives of the people on the brittle, yellowish photographs, we felt proud of their knowledge and their passion. They had an identity, a Jewish identity, that stemmed out of Jewish roots.