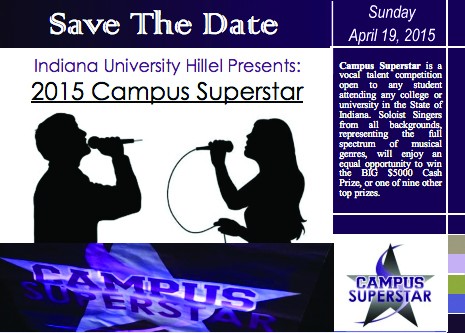 Future celebrities will blossom when homegrown talent competes for a $5,000 grand prize. The competition, called Campus Superstar and chaired by Dick Leventhal, is open to any college student in the state of Indiana and is the Helene G. Simon Hillel Center’s largest fundraiser.

The contest, based on the hit TV show American Idol, has been held annually since 2004. Join us for the crowning of Campus Superstar 2015 at the finals in the Tobias Theater (The Toby) at the Indianapolis Museum of Art on Sunday, April 19.

Hillel Executive Director Rabbi Sue Laikin Silberberg said that this wonderful event showcases college students’ talent. “This is a fantastic way to help students grow their singing talent and raise awareness of the gift these young people have musically. In addition, the students working on the show learn valuable leadership and life skills. We invite everyone to come out and enjoy the event,” Silberberg said.

Competitors in Campus Superstar compete in three rounds. Over 100 talented college students have already auditioned in Bloomington and Indianapolis this month. The 25 most talented performers will compete in the semi-finals at the Buskirk-Chumley Theater in Bloomington on Sunday, March 8. The top 10 contestants, based on the judges’ votes and an audience top choice award, will move on to the final round of competition on Sunday, April 19, in Indianapolis.

To become a sponsor or to learn more about Campus Superstar, go to www.indianacss.com, visit the Hillel website at www.iuhillel.org, email philsilb@indiana.edu, or call 812.606.6586.