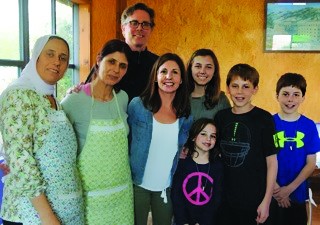 We have been honored to host Brigadier General (Res.) Eival Gilady at our home during several of his visits to Indianapolis. While he always provides us with updates on the current security situation, Gen. Gilady is passionate about improving the lives of Israelis in the Western Galilee. As Chairman of the Board of the Western Galilee College in Acco, he helped transform this community college that serves students from Arab, Christian, Druze and Jewish communities. Gen. Gilady hosted our group at the college and gave us a wonderful campus tour. We learned how education is changing this underserved area and bringing Jewish and non-Jewish Israelis together.

During our visit to the Golan Heights we took a jeep tour near former Syrian mine fields, and then proceeded to the Mount Bental overlook for a view of Mount Hermon and Syria. We saw a group of Israeli soldiers learning about the military history and amazing tank battles that took place in what is now called the Valley of Tears after the Yom Kippur War of 1973.

We spoke with U.N. soldiers from the Irish Army who were completing their six month tour of monitoring the demilitarized zone that separates Israel and Syria. As we sat on a former Syrian bunker and looked out into Syria, we were shaken by two large explosions from the Syrian civil war. Not only did we learn about the history of this critical region, but we experienced the ongoing conflict and gained an even greater appreciation of the tough landscape in which Israel exists.