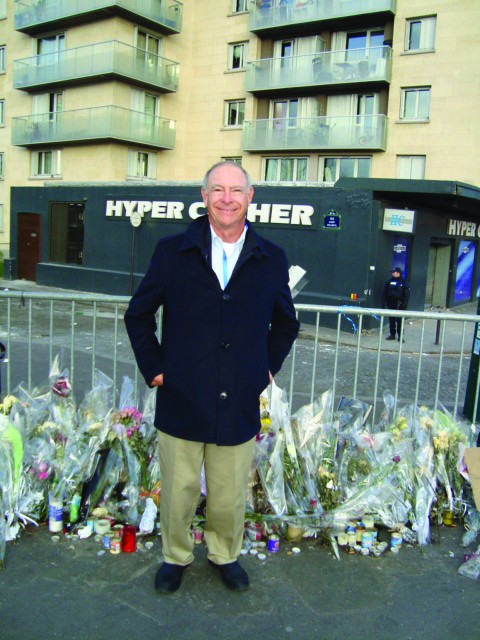 I spent time in Paris on a solidarity mission organized by the Jewish Federations of North America (JFNA) from February 8-10. The primary purpose of solidarity missions is to demonstrate to the members of the community visited that they are not alone, that they are supported by North American Jewry. This mission was organized once the chaos in the Paris Jewish community had subsided after the terrorist attack last month in Paris on the Charlie Hebdo (pronounced “heb-dough”) magazine, in which 11 journalists and one policeman were brutally murdered and 11 others injured ... and which was followed, shortly thereafter, by the incident at the Hyper Cacher (French for Super Kosher) supermarket, at which four French Jews were murdered.

I had the interest, the inclination, the energy, plus I would be informed and able to help raise funds if necessary. Forty-five volunteers and professionals participated in the mission. There were three security people with us at all times. There had been a warning about wearing kipot on the street, but nearly everyone who normally wore them all the time still wore them. We wore ribbons on our name tags that said “Je Suis Juis” meaning “I am Jewish.” We never felt threatened at all.

Here is some background information.

• France has the third largest Jewish population in the world (550,000), trailing only Israel and the United States.
• About 50 percent of the Jews are unaffiliated, 20 percent are only marginally affiliated, and 30 percent are affiliated.
• There are over 700 Jewish organizations in France.
• There has been a vibrant French Jewish community for over 1,000 years, four times older than the entire history of the United States.
• France is the only country in Europe to have had two Jewish Prime Ministers
• In 2014, hate crimes more than doubled and more than half of the hate crimes were directed at Jews.

JAFI (Jewish Agency for Israel) has a long and active role in French Jewish life, e.g., shlichim deployment, striving to bring every 10th grade Jewish child to Israel during the summer before their junior year. These Fairs are held monthly with booths from Israeli universities, yeshivot, and numerous communities. French immigration to Israel has tripled in the last three years, but was just 7,200 in 2014. It is anticipated that it will at least double in 2015 and perhaps will be even more given the events of last month.

The Hyper Cacher incident occurred on a Friday when the terrorists knew many Jews would be shopping for Shabbat. Since it was a place of business, the terrorist knew he would not encounter security, e.g., controlled entrance into the store.  Four men were killed in the store just because they were Jews. An employee, a Muslim man from Mali, led 15 people into a basement cooler and locked them in; their lives were saved as a result.

We heard from a young Jewish woman who happened into the store and was able to hide from the terrorist with help via text message from her boyfriend (now fiancé) who was a policeman. The store was not open when we were there and was guarded by soldiers. We heard that the store would not re-open and that the manager was making aliyah to Israel.

Meeting with Jane Hartley, U.S. Ambassador to France and Monaco

Jane Hartley told us the U.S. government is working closely with the French government on these issues. You may recall that the Ambassador was the senior representative of the U.S. at the march following these incidents. I remarked to one of her aides as I left that it was a shame that this had occurred. She responded that this was one of the few times the White House had ever expressed its regrets over something.

There was a program of interfaith dialog between Ghaleb Bencheikh, a theologian, son of a former Mufti of Marseille (an Islamic scholar grounded in Islamic law) and a broadcaster on French public television and Rabbi Abecassis, who heads an organization committed to Muslim-Jewish dialog and education. This presentation gave me the most optimism about France and Muslims in all parts of the world. They spoke so civilly to each other and about the situation. Hopefully, the voice of moderate Muslims will become the voice that is heard all over.

Before I left, I wrote a law school classmate of mine who was living in Montpellier in southern France. This was the substance of our email exchange: Art, I’m coming to Paris from February 8-10 with a Jewish Federations of North America Solidarity mission.

Hi Chuck,
It is good of you to come here on a solidarity mission. Jews of France need solidarity badly and I think they will need it more so as time goes by. To be lucid and frank, Chuck, I am concerned about the future of Jews here. A couple of years ago we bought a condo in Longwood, Florida, where our daughter lives. Wandering Jews (like we are) must always worry about the future and so we have a place to move to, just in case things turn for the worse. I am pretty certain they will turn for the worse in the next few years despite government speeches and actions. In fact, the Prime Minister, Emmanuel Valls just made a superb speech to the Parliament with a vibrant and elegant call to fight anti-Semitism. Recognizing that some Jews are looking for the door—to Israel, US, Canada, Australia or wherever—he made a plea for Jews to stay. He said France would not be France without the Jews. France is the third largest Jewish community in the world but maybe not for long. It was as favorable a speech as one could imagine, but speeches will not change the reality of growing anti-Semitism. Maybe nothing will. I don’t know.

As you may remember, Chuck, I do a weekly radio program on Radio Aviva 88FM (you can listen in real time to my program on internet but it is in French), and the studio is in the main synagogue building in Montpellier. It is a Jewish community radio station, of course. So I am there at least once a week. As with many sensitive places, there is a French army unit of about nine soldiers relieving each other and protecting the synagogue. That can give you an idea of the threat level the government perceives. It is not pleasant going to the synagogue under those conditions, but that is the reality here and I am sure you will see it when you visit.

I hope my friend is wrong. I believe that French Jews are, for the most part, very nationalistic, just like American Jews, and do not want to leave their country. Someone recently asked me why, since I profess such a deep love for Israel, I did not move there. I thought for a moment and responded, “I am a Jewish-American, not an American Jew.” Not by any measure do I mean that Judaism is not important to me, but I feel that I am defined by my Americanism, not by my Judaism. I sense that most French Jews feel the same, but don’t want to live in fear.

From its experience with Soviet Jews, Israel has proved it is able to absorb massive numbers of immigrants. Thank God Israel is there as a refuge for any besieged Jewish community. However, the diminution or disappearance of a large and important Jewish community such as France is something I do not want to contemplate.