The Palladium at the Center for Performing Arts 1 Center Green
Carmel, IN 46032 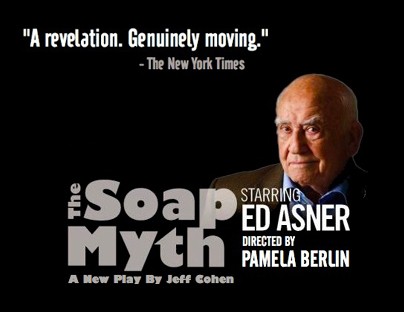 Seven-time Emmy Award Winner and five-time Golden Globe Winner ED ASNER—famous for his role as Lou Grant in The Mary Tyler Moore Show and most recently as narrator of EVA: A-7063, the award-winning documentary about Holocaust survivor Eva Kor—stars in this National Tour of The Soap Myth, a play by Jeff Cohen.

Taking place more than a half century after World War II, at the desperate urging of a passionate Holocaust survivor, a young investigative reporter finds herself caught in a battle between conflicting accounts of the Holocaust experience.

The drama unfolds around the central question of who has the right to write history – those who have lived it and remember, those who study and protect it, or those who would seek to distort it.

A “concert reading” of The Soap Myth has toured the country over the past several years, with Ed Asner’s portrayal of Holocaust survivor Milton Saltzman called the crowning achievement of his illustrious career.  The other cast members include Dee Pelletier, Ned Eisenberg, and Liba Vaynberg.

Tickets include a special post-performance talk-back session and dessert reception with the cast and a special guest!