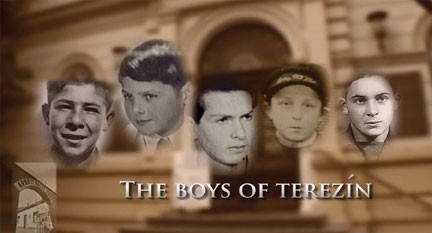 In conjunction with Indianapolis Opera Brundibar & Vedem program the JCC is excited to screen the documentary film, Boys of Terezin by Music of Remembrance, the group that commissioned Vedem.

Members of Seattle's acclaimed Northwest Boychoir, perform a new oratorio that opens their eyes to what the Holocaust's genocide meant to teens just like them. They meet the surviving "Boys of Terezin," and learn the poems that the boys wrote for their secret magazine VEDEM while imprisoned by Nazis. Stunning music by American composer Lori Laitman illuminates the boys' homesickness, fatigue from cold and hunger, and anger at their imprisonment--and also their humor, courage and unity even at the darkest of times.

In a poignant finale, four "Boys of Terezin" reunite in Seattle--after sixty-five years--for the world premiere performance of the new Music of Remembrance oratorio, remembering their lost friends, honoring the courage and idealism they all shared, and proving that nothing is as deeply human as the music we share.

Come to the JCC on April 2nd at 7 pm to see this moving documentary to introduce you to Vedem in advance of the opera's performances April 24, 25, & 26.

Sponsor: Indianapolis Opera and others