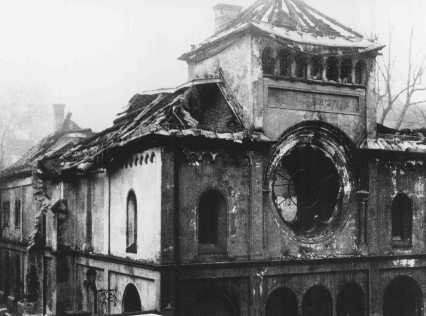 On Nov. 9th 81 years ago, shattered glass littered the streets of many a German city and village. Flames ripped through synagogues as police and firefighters stood nearby, but did not move a muscle to stop the destruction. Cries echoed through the night as women and children fearfully watched their husbands and fathers being beaten and arrested.

Kristallnacht (Night of Broken Glass) marked a turning point for many Jews throughout Germany and Austria, as it was the first large-scale pogrom issued by the Nazi government. Many Jews began to fear that the antisemitism that defined the Nazi Party was more virulent than previously thought and was a strain of which they had never before seen. This realization prompted roughly 115,000 Jews to emigrate from the Reich (Germany, Austria, and the Sudetenland), with thousands more placed on wait lists for immigration visas. Unfortunately, very few on those wait lists (and even those that emigrated) would survive the next seven years.

The events of November 9-10, 1938 served as a turning point for not only the Jews, but the Nazi regime as well. The passivity with which the German population responded to the violence against their Jewish neighbors signaled to the Nazi regime that the public was prepared for more extreme measures. Radical antisemitism that once simmered under the surface was brought to the forefront of official policy with measures being concentrated more concretely into the hands of the SS. The Nazi regime was successfully able to segregate and isolate Jews from their fellow Germans through policies that effectively marked Jews as “the other.” Jews were barred from all public schools and universities; all Jews were required to carry identity cards that indicated their Jewish heritage; and all Jewish passports were stamped with an identifying letter “J.” These extreme policies would become more and more radicalized throughout the remaining seven year Nazi reign and would end with at least six million Jewish dead.

As we look back on the events of 81 years ago, it is important to remember that events such as this continue to happen around the world today. The Rohingya Muslim minority in Myanmar are terrorized by the Burmese military through means of severe discrimination, escalating violence, and denial of citizenship. In China, the Uyghurs, a Muslim minority, are arbitrarily detained in political education camps, held in overcrowded and unsanitary conditions, and tortured into compliance until their religious beliefs are “eradicated.” In Iraq and Syria, the Yazidi are still being held prisoner and forcibly assimilated into the remnants of Daesh, also known as ISIS/L. These examples are but a fraction of vulnerable populations currently facing discrimination, violence, and mass atrocities. We must allow the events of the past to serve as a reminder to raise our voices against oppression in the present and future.